The Royal Challengers Bangalore have secured their place in the 2021 IPL Playoffs after beating the Punjab Kings by 6 runs in Sharjah! RCB won the toss and elected to have a bowl first in this contest, a decision which appeared to have paid off quite nicely during the early exchanges as the classy opening pairing of Devdutt Padikkal (40) and Virat Kohli (25) took the attack to the Kings’ bowlers in fine fashion during the powerplay and produced a solid 68 from the first 54 balls of the innings to propel the men in red and black up to a seemingly promising score of 68/0 in the 9th over of their innings. However, as soon as the latter was clean bowled by Aussie seamer Moises Henriques (3/12) at the beginning of the very next over, the Royal Challengers’ innings began to buckle slightly as the inspired Punjab bowling attack, led by Henriques and fellow seamer Mohammed Shami (3/39), dismissed the dangerous Padikkal and Aussie number 3 batsman Dan Christian (0) in quick succession to leave RCB wobbling on a rather more perilous score of 73/3 in the 12th over of their innings. To the immense relief of the Royal Challengers though, the ever reliable fourth wicket pairing of Glenn Maxwell (57) and AB de Villiers (23) finished off the remaining 8 overs of their side’s innings with a truly fantastic flourish in Sharjah today as the destructive middle order duo dispatched an invaluable flurry of fours and sixes towards the latter stages of the innings to provide some desperately needed momentum for their side and ultimately take the men in red and black up to a more than competitive total of 164/7 by the end of their 20 overs.

In response to this respectable batting display from the Royal Challengers, Punjab got off to a typically scintillating start to their run chase as the imperious opening pairing of Mayank Agarwal (54) and KL Rahul (39) launched into the RCB bowlers from the get-go and blasted a phenomenal 81 run partnership from the first 60 balls of their side’s run chase to quickly propel the Kings up to a seemingly promising score of 81/0 in the 10th over of their innings.

However, as soon as the assured Rahul was sent back to the pavilion by wily left arm off spinner Shahbaz Ahmed (1/29) at the end of the very next over, the Kings’ run chase began to collapse at a truly extraordinary rate of knots as the clinical Royal Challengers bowling attack, spearheaded by prolific leg spinner Yuzvendra Chahal (3/29) and English seamer George Garton (1/27), kept things tight sublimely and carved through the Kings’ middle order with surprisingly little resistance to ultimately restrict the men in red to a fighting total of 158/6 from their 20 overs. As always, well played to both sides out there today and congratulations to RCB for sealing their place in the 2021 IPL Playoffs 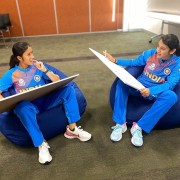